Research in the field of electrophoresis

A part of the Liquid Crystals and Photonics Group is specialized in charge transport in display devices and in electrophoresis in general. For example, ion transport has important consequences in liquid crystal devices. Also, fundamental research is carried out on electrophoretic displays, a technology for electronic paper based on electrophoresis. Below some background information is given on the topic electrophoresis, and an overview is given of different research topics within our group. References of work published by our group can be found below.

"Electrophoresis" means motion due to an electric field. In general, the charged particles performing electrophoresis can either be charged molecules, charged colloidal particles (i.e. particles larger than 1 nm but smaller than a few micrometer), that are present in a gas, liquid or gel.

Fig.1. Electrophoresis of a charged particle in a uncharged viscous medium.

Fig. 1 shows electrophoresis of a spherical particle with charge q. The particle velocity is the result of a balance between the electrostatic force and the friction force. In our group we are mainly interested in electrophoresis of molecules, micellar aggregates and solid colloidal particles in a liquid. The first studies of electrophoresis of colloidal particles are situated around the beginning of the 19th century, and are closely related to the development of the optical microscope at that time. For example, Reuss discovered in 1809 that colloids can naturally carry a charge, by observing the motion of clay particles in an electric field (F. F. Reuss, "Sur un nouvel effet de l'electricité galvanique", 1809).

Fig.2. Forces on a charged particle in electrophoresis in an electrolyte. The gray zone represents the countercharge in the electric double layer.

Since those early years, several theories were established (e.g. the standard elektrokinetic model) to explain various electrokinetic properties of colloidal particles. For example, electrophoresis of a charged particle in an electrolyte has been described by 4 contributions: the electrostatic force, the friction force, and forces due to retardation and relaxation caused by the countercharge in the electric double layer (see Fig. 2).

Fig.3. Random fluctuating forces due to the liquid molecules (a) are causing the macroscopic Brownian motion of particles in a liquid.


Colloidal dispersions are mixtures of a disperse phase in a dispersing medium. In general, both the disperse phase and the dispersing medium may be solids, liquids or gases, as long as the particles of the disperse phase are much larger than the molecules of the dispersing medium. Fog is an everyday example of a colloidal dispersion in which water is dispersed in air. When solid particles are dispersed in a liquid, it is called a "sol". In the context of this thesis, the terms "colloid", "colloidal suspension", "colloidal particles" or just "particles" are used to refer to a sol. Typically the size of colloidal particles is smaller than a few micrometer and larger than 1 nm, so that a colloidal dispersion is distinguishable from true solutions. The first studies of colloidal particles are situated around the beginning of the 19th century, and are closely related to the development of the optical microscope at that time. A well known example is the experiment of Robert Brown in 1828 (R. Brown, Philos. Mag. 4, 161, 1828) in which he observed the random motion of microscopic pollen in water, later called "Brownian" motion (see Fig. 3). Another example is the discovery of Reuss in 1809 that colloids can naturally have a charge, by observing the motion of clay particles in an electric field. Those early observations triggered an expansion in the understanding of the properties of colloidal particles, and even led to important new physical insight. For instance, Brownian motion turned out to be hard evidence for the atomic structure of matter. In the years between 1800 and 1950 several theories were established to explain various electrokinetic properties of particles.

Polar and nonpolar liquids are distinguished by their ability to polarize in response to an electric field. Depending on their size and atomic structure, molecules in a liquid can have either a permanent dipole moment, attain a dipole moment in an external electric field, or just have no dipole moment at all. Dipole moments tend to align with an electric field, creating a field in the opposite direction and thereby reducing the original field. Molecules with no polarization do not align with the field and do not influence the field. The extent to which a material influences the electric field by its polarizability is described by the relative dielectric constant εr. Liquids are roughly classified as polar (εr> 40), weakly or moderately polar (5 < εr < 40) and nonpolar (εr < 5). Water is an example of polar liquid with εr = 80, dodecane is a nonpolar liquid with εr = 2. The polarity of a liquid has some important consequences (see Fig. 1.1). It explains the strong ability of polar liquids to dissolve salts, because the attractive field between oppositely charged ions is strongly reduced. The magnitude of the electrostatic force between two ions with charges q1 and q2 separated by a distance l in a liquid with dielectric constant εr and with vacuum permittivity ε0, is given by: F = q1q2/4πε0εrl2.

Fig.4. The electrostatic force between opposite charges in a polar liquid (left) and in a nonpolar liquid (right).

For example, in the case of the salt NaCl in water, the attractive force between the ions Na+ and Cl- is reduced 40 times in comparison to dodecane. Therefore, free ions can exist easily in a polar liquid, because the electric force trying to recombine opposite charges is strongly reduced (Fig.4 left). In contrast, in nonpolar liquids the electric force between opposite charges is strong, making it very difficult for ions to remain free in the solution (Fig.4 right). Another consequence is that the charge of colloidal particles in nonpolar liquids is typically low compared to particles in polar liquids. The explanation is similar: in polar media surface molecules can easily ionize, leading to a charged particle surface, while this is more difficult in nonpolar media.

Fig.5. Surfactant molecules in a nonpolar liquid (a) forming inverse micelles (b). 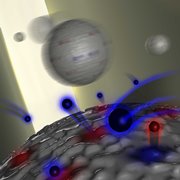